Romance That Thrives in the Dark

What they are saying about Shadowed Souls:

The heat between Diego and Titania grows with each page and is definitely sizzling…
Judy, Long and Short of it Reviews

RIVETING! A deeply compelling read, that will keep you captivated until the end. Well written characters and some very important secondary characters are the foundation for the awesome tale….
Wateena, Coffee Time Reviews

…spell binding! Diana Castilleja was positively pure magic, she truly pulls you in to the story to feel the emotions that her characters feel…
Deb, Sensual Reads

Fabulous plot building and fascinating characters left me craving more when I turned the last page. The slowly building sexual tension between Diego and Titania left me holding my breath, waiting for that first fateful moment where they acknowledge the attraction between them….
RECOMMENDED READ!
Hayley, Fallen Angel Reviews

…one of the most powerful love stories I’ve read recently. …a fantastic job molding her characters, both good and evil.
Dee, The Romance Studio 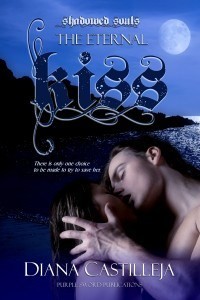 Diego Viteri has lived for centuries with only one real goal, to avenge himself against the one who destroyed the man that he was and created the creature he is now. He is suffering a growing loneliness that is becoming impossible to ignore. His only reason for not ending his life is to see that Brakka is served his justice and then, Diego can rest. The last thing he is expecting is to have an encounter with a human woman who is willing to jump between himself and Brakka during a harsh and bloody battle. Their one meeting changes everything for Diego, bringing to life emotions and wants that he has long believed to be as dead as he is.

As he follows Titania and her band, his needs reshape into something that he can’t ignore. Before he knows what he has done, he bonds with her and sets into motion the very thing he swore he would never do to another person. He has shared his curse and in the process may have very well killed her. And there is only one choice to be made to try to save her. 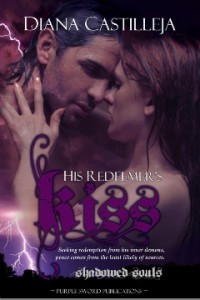 Seeking redemption from his inner demons, peace comes from the least likely of sources.

After existing for three hundred years, Joaquin Ramirez has fought the last nightly battle for his sanity. Rather than relinquish his tenuous hold on humanity, to not become the soulless monster that lives within him, he has decided suicide is a more honorable death. Until an unknown voice whispers from the darkness to literally shout at him—‘coward’.

Lily Jaspers is an enigma to Joaquin. A woman who has been abused, her internal pain shrouds her telepathic words. Yet she is living with, protected by, the very creatures Joaquin has no trust in—the Brethren. Maniacal and cruel, the Brethren are the vampire society as it is known, and feared, by humans. They are soulless beings who were once men of honor, like Joaquin. The one he faces who protects Lily is, in fact, the most adept and strongest he’s ever met. The whole situation intensifies when the home where he found the holder of the enchanting voice is attacked by a human force that leaves no doubt none were expected to survive.

Fleeing under the cover of night sets a path for both Joaquin and Lily that neither will be able to escape as danger from her past, alongside the secret of his reality, threaten not only them, but the freedom Lily and her friends have fought so hard to achieve. A freedom that can be destroyed in the blink of an eye.