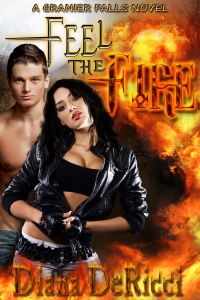 Rob’s been working like the proverbial dog for months when he takes a trip to Granier Falls with his sister. Grateful for the break, he can’t believe his good fortune when he meets Maddie. She’s playful, fun, unpretentious with a beguiling innocence and unlike any woman he’s met in recent memory.

A long distance friendship soon turns into a torture of its own for Rob who shows up on her doorstep with nothing more on his mind than the hope of a wild weekend with the woman he can’t forget.

Cursed from birth, both he and his sister share a trait that they can’t explain, and have feared since their very power forced them out on the run. When there is a faint flicker of hope for a normal life, it crashes around him when his sister is yanked out of her home. Trouble from his past collides with the force of Maddie’s over-protective family and Rob is faced with the challenge of a lifetime–save his sister, love Maddie, or lose them both.

All he wants is a normal life with Maddie in Granier Falls. But the truth about his power could ruin it all before the end of the weekend.

“What are you wearing?” The rich drawl on the other end of her phone slipped into her ear with a silken curl that made her smile.

Maddie stretched out on the couch, pressing herself into the fluffed pillows behind her. Her heart sped up hearing his voice again. She loved these little fantasy games between herself and Rob. They did, at least occasionally, break up the monotony of her singleness. “Are you in a leather or lace mood?” she asked.

She heard his breath grind to a halt across the miles and imagined the slow heated burn in his eyes, the half drop of his lashes that would cover his gaze. He had these brown eyes that could make her melt into a puddle at a glance. Too bad she never got the chance to find out just what it would take to make her melt.

“How’d you get to know me so well?” Rob asked her, his playful grin evident in the tone. She shivered a little at the heightened sense of his teasing. Was there a huskier note in his voice tonight?

She and Rob had gone out a couple of times when he’d been in town for a friend’s wedding. He lived five hours from her hometown of Granier Falls, and with him in town for only a few short days, both accepted that something deeper wasn’t in the cards for either of them. Trading phone numbers as friends was as close as they could get under those circumstances. Then one night a couple of weeks later, he’d called to rant about his latest girlfriend breakup. After consoling him and stroking his wounded ego, they’d started talking about an outfit she had been wearing because she’d been fighting with the jacket portion all day and frustration had made her testy. A few teasing quips about not wearing the jacket, or much of anything else, and that one conversation had playfully deteriorated from there. Ever since … she grinned in memory. The teasing was harmless. A few words, something to take the stress of the day away, and it was usually just fun enough to fuel her own sexual fantasies. Playful and never anything too deep or serious. It had been a long dry spell before and since Rob had been in town. Sadly, she never got to do more than kiss him goodbye when he left. A chance lunch and shared coffee in a crowded shop doesn’t lend well to leaping across tables to attack delectable lips and the male package attached to them. Lost opportunities and water under the bridge. But that was then, this is now.

“Let’s just say that I’ve gotten good at listening for it in your voice.” She paused and narrowed her eyes, listening for the deeper nuances in his words, then told him, “You’re in a leather mood. Did you have a hard day?”

“The worst.” This time his sigh was full and he groaned. “Getting comfortable,” he explained. “They dumped another full schedule on me this week.” She heard the sound of a car door. He must’ve just gotten home.

Noting the time, she shook her head in sympathy. “They really need another manager for that office.”

“Tell me about it,” he groused. “I’m sick of doing the job of three and getting paid for one. At least make it fair and pay me for the work of two.”

She laughed when he did. “Poor baby,” she murmured. She lifted a leg and rested her hand on her thigh, sitting in the corner cushions of her couch. Lass, her cat, jumped up to the back of the sofa, lying down like a large fur throw pillow.

“Want to kiss my boo-boos?”

“Not if I’m the one in leather,” she answered him firmly. A shiver rocked her. What she’d give to really play with him. Why muck up such a good friendship with sex? Well, real sex anyway. “You need to relax, Rob.”

He breathed an affirmative. “I want to,” he replied. “I’ve been working late all week. I think I’m going to take a break tonight. A long, hot shower or something.” He purred suggestively into the phone.

She closed her eyes and envisioned his naked chest dripping wet and licked her lips. It was a wondrous sight indeed. Not that she’d ever seen him without a shirt, but she could certainly imagine it. She was not lacking in imagination.

“I’ve changed my mind,” he said a minute later, his voice dropping to a seductive, teasing tone. “I definitely want you in lace tonight. Something sheer.”

Her lids lowered to half mast and her chest heaved on a breath. “Oh?” Her heart skipped a beat. “Why?”

“Because tonight I’m going to make love to you.”