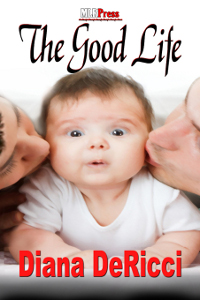 Chad Rarig and Sonny Phillips have been friends since skinned knees and after school homework. Life is pretty normal, if a bit bland for Chad, until he recieves a phone call that changes the rest of his entire life. With Sonny’s strong shoulder in friendship and his mother’s support, he cautiously embraces his fate, one that includes binkies and an utter loss of sleep.

Sonny offers a chance to let Chad settle into this new wilderness of parenthood, sharing his home with his best friend. Only he definitely hadn’t anticipated having to deal with an attraction that left him panting and hungry as a starving man for his best friend. His gay best friend who thinks Sonny is straight, because he’s never told him the full truth to preserve their friendship above all else.

Can Chad come to terms with all the challenges of fatherhood and still keep Sonny’s friendship? Will either be willing to take the risk to cross that line from friendship to something more?

perfect for each other and the life they have is true love indeed. ~~ Tina

“Sonny, I’m in trouble.” Chad Rarig gazed at the carrier at his feet and felt his stomach threaten to upend. It was a good thing he was already sitting down. His knees felt like water. The hand holding the phone trembled, and he wiped the other on his jeans. His throat constricted from trying to catch his breath.

Dyson “Sonny” Phillips, his best friend with the soothing voice that Chad had known his entire life, asked one question. “What did you do now?” Because there was always an explanation for any trouble Chad had found himself in, and it was always a forgone conclusion that Sonny would save the day. Only this time…

Chad barked a laugh that teetered on hysterical. The baby in the carrier didn’t even flinch. Holy hell, do they all sleep like this? “I didn’t… I mean, apparently I did, but shit, Sonny, I don’t know what to do.”

“Slow down.” Chad’s phone rumbled a little next to his ear. Sonny must be outdoors. There. Some of the background noise vanished. “Okay. I’m in my truck. Talk.”

Chad sobbed, or tried not to bawl, and it came out in a choked sob. He was falling apart. “Do you remember Elizabeth?”

Chad knew he was going to Hell for this one. “The friend’s daughter? Tall blonde?” It wasn’t like he dated so many women his best friend wouldn’t remember. It was the fact that he didn’t date women. Going out with Elizabeth had been a favor for his mom. A friend whose daughter was coming home to visit from college, and his mother asked him to show her a good night out. He’d been twenty-two, seven years ago now when they’d first met. It felt like a lifetime.

“That blonde? She was ages ago.”

“Yeah, well, we became friends, and she asked a favor of me.” The favor was currently making smacking sounds at his feet.

“What kind of a favor?” Sonny asked, unconcerned. It wasn’t like Chad typically lost it, but very little ruffled Sonny, which was why they were the best of friends. Sonny kept Chad sane.

Usually. He was desperate for that blessed calmness to overtake him.

Chad held his head in a wavering hand. “I just came home from the hospital, and it was a mess. I just don’t know what to do. I mean… I’m sinking, Sonny. This isn’t what I had planned. She left her to me, and I never thought it would happen. I mean, this wasn’t part of the deal-”

“Okay, back up. Slow down, and start from the beginning. You have diarrhea of the mouth again.” Now Chad had Sonny’s attention.

Chad clenched his eyes shut and drew a very slow, dry breath. “Right. Okay.” He blew it all out in a pained rush. “Elizabeth asked me to be a sperm donor.”

“Don’t. Wait. It gets worse.” His bottom lip quivered, and he bit it to make it behave.

“She dumped the baby on you?” Sonny retorted scathingly.

Chad slouched over his knees and felt the hot pressure of tears. He’d managed to keep the shock at bay, but his control was wearing thin. An unpredicted phone call at work had changed everything for him for the rest of his life. It had taken more than an hour of paperwork to have her released to him at the hospital: status and identity verifications, birth certificates. He closed his eyes to stop the swaying dizziness before it took over. “She died last night, Sonny.” God, Elizabeth.

“No! Elizabeth.” He sobbed again, sucking air to force the words through a burning throat. “She was struck in her car. She bled…bled…” Chad choked, stumbling over that fact. He couldn’t make his mouth say the words. She hadn’t died on impact, and that somehow made it so much worse, because he knew she’d died in pain, alone. At least the baby-he hadn’t even used her name yet-had been at daycare. Elizabeth had died on the way from work to pick up the infant still soundly passed out at his feet.

“She’s safe. I…I’m lost Sonny. I don’t know what to do with a baby,” he whispered, his throat constricting. It was like trying to talk with sandpaper shoved down his pipe.

“Can you hold out for a little while? I’m across town on a job.”

A life preserver had just appeared in front of Chad, and he grasped it with a death grip. The feeling of going under lessened. “How long?”

“Give me an hour to settle this afternoon’s work and get there.”

“Okay. She’s been asleep for a while.” Chad prayed she stayed that way.

Sonny parked his truck in front of Chad’s apartment and killed the engine with the twist of a key, still a little stunned with the news while gazing through the windshield to Chad’s door. Chad had been a constant shadow to Sonny since they were kids. Sonny was football, and Chad was classic nerd, but Sonny wouldn’t give up their friendship for anything. They’d been as close as brothers living across the street from one another, in and out of each other’s houses on a near-daily basis. Heck, Chad’s mom had been Sonny’s mom almost since day one. She still was.

Sonny hadn’t turned away when Chad had come out to him and the rest of his family, and he wouldn’t leave him floundering now.

Though… A baby. Wow.

He heard the earsplitting screams before he reached the door. Sonny winced. He knew that alarm. Tapping the door, he hoped he didn’t find Chad a drooling lump on the floor.

The door popped open, revealing a frayed Chad looking close to tears himself. His short brown hair was spiked from his fingers plowing through it.

“Okay, show me,” was all Sonny said. Chad stepped back and pointed to the blue baby carrier on the floor. There was a squalling mess of royally pissed off angel beneath the blanket.

Sonny walked in and knelt by the carrier then lifted it to the craptastic futon Chad had owned forever to get a better look at her. Her little face was scrunched into a howling fury, red with tear streaks. She hadn’t needed a hat indoors, so the soft down of corn silk yellow on top of her head was matted down from her tantrum.

“Poor thing,” he crooned. “You just don’t know what’s happening.” He caressed the softness of her hair, and fond memories of his nephews popped up.

The baby, on the other hand, wasn’t having anything to do with it. He lifted the blankets and unbuckled her. “Well, that’s half your problem. She needs changed.”

“How can you tell?” Chad stayed several feet back as though expecting her to sprout horns and spit fire.

“The diaper is soaked, and she’s probably starving.” He looked over his shoulder. “Did they give you any supplies?” Chad’s blank look wasn’t promising. “Baby stuff? Diapers? Formula?”

“Oh! Yeah! Someone collected her diaper bag from the daycare when they claimed her.”

“Let’s start with that.” He faced the tiny terror that looked like a doll in his large hands. “What’s her name?” He’d push Chad for some of the harder questions when he wasn’t having a borderline meltdown.

Chad rushed from the room without answering, his feet loud on the carpet as he stomped around. The bag thunked to the floor where Sonny knelt.

“Get down here so I can show you this.”

Sonny wasn’t in the mood for a queen, and his glare shut Chad up. The other man sank at his side, though he didn’t offer to help at all. Sonny sighed. Spreading out the paraphernalia, he did a step by step changing-the-baby lesson.

“What do I do with that?” Chad pointed to the leftover diaper.

“Get a plastic bag, and tie it off. You’ll need an airtight container for them, or you can carry them out to the dumpster each time.”

Chad just nodded, hitting shocked. Mechanically, Chad rose and disposed of the sponge that had once been a diaper. Sonny didn’t bother to ask him for what he needed next, digging through the diaper bag and checking out the contents instead. He scored pretty quickly. It looked like Elizabeth had been an over-packer. Sonny’s sister had been too.

There was a labeled bottle of water and a divided container of powder. A little further digging produced a bottle. He spoke to Chad. “Come here. You can hold her, or you can play chef. Pick.”

Sonny almost chuckled at the wide-eyed panic. “Hey, it’ll be okay. So you have her for now. Just find Elizabeth’s mom, and have her come get her grandchild.”

“She’s deceased,” Chad whispered, plopping to the couch at Sonny’s shoulder. “I’m the only relative. I didn’t know she’d added me, but I’m on the birth certificate. That’s how the hospital knew to find me after…after she died,” he said almost inaudibly.

Well, now Sonny wouldn’t have to ask about that at least. “Okay, one thing at a time,” Sonny murmured. He turned to sit on his rump, leaning against the futon cushion, then tapped a leg at his side with an elbow. “Open the baby bottle, pour in about six ounces of water-use the lines. See them? Then add the powder in one section, close and shake it to Margaritaville.”