Set up: Shar is looking for Trajan at his home, and they are in the paint room of his shop. Let the games begin! 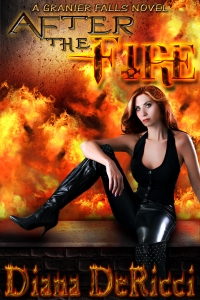 Trajan felt her fingers slide over his skin and he burned. He tried to pull in some control, but Shar was slowly melting his mind and his intentions into a puddle of desire that pumped through his blood like fire.

Sweet heaven, she was a sex kitten. From the leather and lace, to the heart tattoo, to the silky smooth heat of her slit, he was going mad to feel himself inside her. The intention he’d had to enjoy each other and get rid of this itch was turning into something a lot hotter, a lot sexier then he’d ever imagined.

He swept his tongue over hers, caressing her, bringing her up with him again to ride the wave. With one hand palming her head to hold her to him, he held her steady where she kneeled, dropping the other between her thighs again. She moaned into his mouth at the first flick of his finger against her swollen nub. He’d never had one sweeter, drinking in every single drop of her pleasure. He massaged her gently, sucking on her bottom lip as he teased and drifted back and forth over her flesh with deft strokes of fingertips and knuckles. Harsh gasps grew, her body coming alive like a loose electrical current. Her skin warmed where she brushed against the wall of his chest, her nipples dragging against him. The hard peaks struck his flesh like flint.

“You’re so hot, Shar,” he groaned into her mouth. “Come for me again.” He had to have one more. It was becoming a necessity. He had to please her. She had to reach rapture.

She rocked against his hand, mewling with need. He slid a finger into her hot pussy and she whimpered. Heat darted up his spine when he felt her muscles tighten around him. The control he’d held with a tenuous grasp slipped completely free. “I’m going to make you fucking come.” He ground his hand against her and she went wild, bucking against him as he plunged and pushed as far as he could with hard, fast strokes, doing the same thing with his tongue, thrusting and plunging in unison.

She shattered. Ecstasy blazed from her blue eyes and a fine tremble rolled from her lips. Panting gasps made her breasts heave as her channel held and wrapped his fingers in its molten heat. He dipped down and kissed each turgid peak, undoing his jeans with a shaking hand. His cock jumped from the confines as he lowered his pants, as if seeking the heat he craved. He kicked off his boots and shucked his jeans. With careful movements, he laid her down.

“Shar, I’m asking. Do you want me to wear a condom?” He would, but he wanted to feel her skin to skin. He was dying for that feeling.

“Is there a reason you need one?” she whispered, her eyes daring him as she swept a thumb over his lower lip. He found the tip with his teeth, nipping at it, sucking her into his mouth.

He released her, saying, “None.”

With sensual ease, she fed her fingers through his hair and pulled him to her lips, giving him her answer between one kiss and the next. Her breath taunted his control incessantly with those kisses.

He held her firmly between his palms, moving between the firm, pale length of her legs. It was as though she was made for him, her body supple and giving beneath his as he entered her with agonizing slowness.

Wicked grins quickly turned to ragged pants of desire as he filled her. She was beautiful, wrapped in the wonder with her head thrown back and her lips rosy red from his kisses. He felt her body move, convulse in invitation, and he withdrew to hear a tiny whimper of complaint. Thrusting again, heat coated his skin. Desire flared with each motion.

She held him tight, clutching him as he repeated the movement, watching, waiting. Time vanished as he rocked against her. The sounds of her whispered gasps, the mewling of her desire filled his ears. He watched as pleasure raced over her features, her soft lips parted for each moan, a temptation that deserved his attention.

He kissed her slowly, moving with firm thrusts of his body into the silken heat that wrapped him like a glove. He closed his eyes and groaned when he felt the first wave building. She cried out and he lifted himself over her on his palms. “Let me feel you, baby,” he gasped, barely able to say a coherent word, she felt so good. “You’re ready, aren’t you?” He thrust deep, controlling every moment. Wanting it to last, needing to feel her come apart.

She moaned, clawing at his shoulders. Her hips rose up and he let out a shout as the pressure increased. He’d never felt so explosive. When she did it again, he wasn’t able to hold on. The need to fill her, to crawl into her with his orgasm, wrung him inside out.

Her cries filled the room, her legs locked behind his ass, clutching him to her as she reached the pinnacle and fell over it with a rush of liquid heat. Her juice coated him as he pumped his seed into her, each blissful release a breath of heaven.

He groaned once more, sliding down to rest on his elbows, feeling languid in every muscle, covering her sweat-slick body with his. He kissed her shoulder without opening his eyes. Her hand drifted into his hair, twining the length through her fingers.

“Didn’t I invite you for dinner?” Trajan asked with a slow chuckle a few minutes later.

Shar Brenna is a hard-working woman, a respected member of her witch Kin clan. At least until she’s held under suspicion of arson by the local police for the demise of Mystic, a Kin hotspot for the witch clans in Granier Falls.

As clues bring dangers bearing down on her and more of her friends begin to look as though they are in jeopardy too, she must find out who was behind the fire and then face the hunters who are determined to capture a witch.

Fleeing has never been her style when fighting back is so much more satisfying.

Since this is my first Sex Scene Saturday run, I’ll be doing a book giveaway of the featured book. Posts will go up on Saturday, and a name will be drawn by noon (CST) on Monday. So make sure you tell your friends to come and play. 🙂

Also please visit my author friends who are also doing the Sex Scene Saturday! Be sure to comment for chances for prizes (if listed)

One thought on “Sex Scene Saturday: Shar and Trajan”