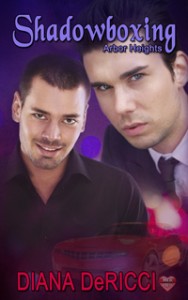 Wayne Hightower has lived with a secret since he was a
teenager. Debilitating to relationships, his condition stands
in the way of his father’s ultimate expectation: Finding a
woman to marry. Of course, if he could do that, he’d have
the grandchildren his mother was craving. And everyone
would be happy happy happy. Or so he’d been raised
to believe. If he could find her. If he could get over his
problem.

Ditched by his brother for their planned night of sibling
bonding, Erich Villalobos invites Wayne out instead as a
simple act of friendship. One night that throws Wayne into
an environment he’d never been exposed to and revealing a
playfully animated side of Wayne Erich had never imagined.
One that he quickly learns he’s actually attracted to.

Secrets. Everyone has them. Wayne. Erich. Even Wayne’s
parents. If Wayne’s brother Curtis were still alive, he could
tell Wayne the cause of his condition and how to cure it.
But dead men don’t talk.

Wayne’s desk phone rang. He reached out of habit more than visual direction to answer it, palming it to shove between his shoulder and ear. “Wayne Hightower.”

“Oh, hey,” he said warmly, surprised. His girlfriend didn’t usually call him at work. He did a quick mental calendar check. Had he forgotten plans for this weekend? For tonight? It was Friday, and he honestly couldn’t remember a single thing. When nothing magically appeared in his memory, he asked, “What’s the occasion?”

He heard the hesitant hitch in her breathing. “Look, I’m just going to say it. Please don’t be mad, and please don’t call me back. I’m breaking up with you.”

“No, I need to, Wayne. I’m sorry. I thought I could be with a guy as wonderful as you and not care about the…other thing. I can’t.”

He blinked with a slow-motion intensity. It wasn’t all stuff he hadn’t heard a thousand−okay, at least five−times already. He knew the drill.

“It’s okay, Denise.” He sagged in his office chair, staring blankly at his empty computer screen. “And I understand. Thanks for at least calling.” It had happened once where a girl had mysteriously fallen out of his life, no explanation, no farewells. He knew nothing untoward had happened to her. He bumped into her at the grocery store not long ago−with her newest boyfriend.

“You’ve been a wonderful boyfriend,” she told him. “I’ve never known anyone as sweet or caring as you, but I just need…  Well, I need−”

“No, I know.” He cut the sigh off at the pass. He rested his head to the back of his chair, gazing upward at a nondescript ceiling and one of the many patterned tiles above him. “You’re a wonderful woman, and deserve more. I wish I could, to be honest.” He’d made that wish for every woman he’d dated. He’d thought the more he got to know Denise, she might be the one. She wasn’t.

“I know you’ll find the right girl,” she said optimistically. “The woman you get will be treated like a queen. I know that for a fact.”

He snorted softly. Charm and manners wouldn’t win him any woman’s heart if he couldn’t get past his current problem. “I appreciate it,” he muttered.

“We had some wonderful dates,” she offered, attempting for jovial.

She sighed, a muffled sniffle on the tail end. “Okay. I am sorry.”

“No, I’m the one who’s sorry.” And he was. “Good-bye.” The phone landed with a dull thunk in its cradle. He crossed his arms to stare at the lone picture pinned to his cubicle wall. There weren’t many options for his next move. Tugging out the thumbtack, he held the photo to study her features one last time before tossing it in the trash. He pitched the tack to his desk. The one hopeful spot in his life: gone.

Not her, specifically, but what she could have represented.

Back to square one.

“Hey, Wayne,” Erich said from behind him, interrupting his melancholy trip.

“Hey,” he answered. He twisted to squint over his shoulder. “What’s doin’?”

“I just got off the phone with my brother. Wanted to see if you’d like to go have a drink after work.” He twitched a chin toward the space where the photo had been pinned. “I’m betting you need it more than I do. What happened?”

“Denise broke up with me.” He rolled a shoulder. Nothing new.